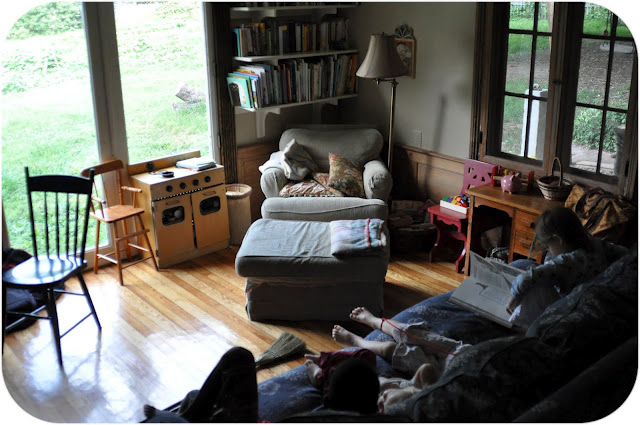 I am on a home organization kick right now.  This is a direct result of tackling my to do list.  There is always some sort of first step I must take before doing much of anything.  For instance, I can’t make dinner until the kitchen table is wiped and the floor is clean.  I can’t begin to make my homeschooling plans for the fall until I have sorted and organized all my homeschool materials.  And of course sorting my homeschool materials leads to things like rearranging the books on my shelves, and then rearranging the furniture as well.  This may sound a bit nuts, but it is the way I operate.  Right now, I am really enjoying all these projects, in sort of the same way I enjoy preparing for a new baby. 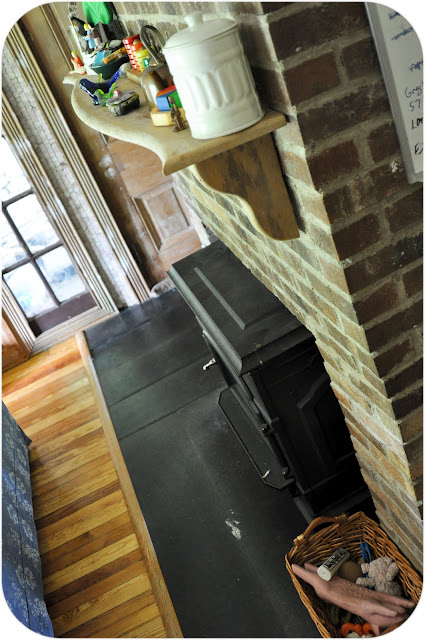 During the winter our big couch faces the woodstove and we scoot it really close.  I had forgotten my plan to turn it around for the warmer months, so we have a nice view of the garden.  Jonny and I flipped it last night, and I am really happy with the new arrangement. 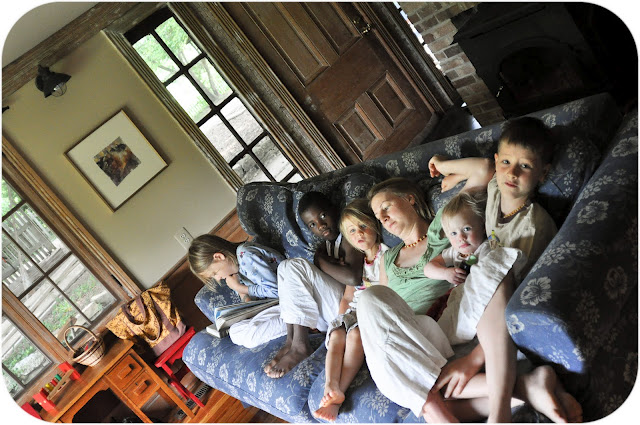 This is first thing in the morning (around 8:30 a.m., as we are not early morning people,)  the kids and I piled on our beat up couch that is thankfully big enough for all of us to fit on it.  This is a common scene in our house, although I usually have a book in my hand.
Scenes from my spot on the couch: 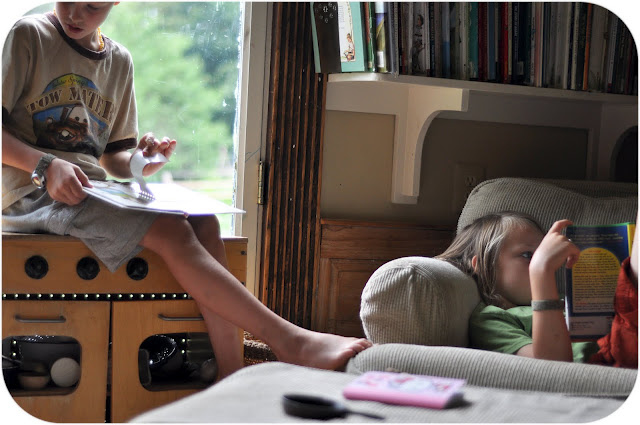 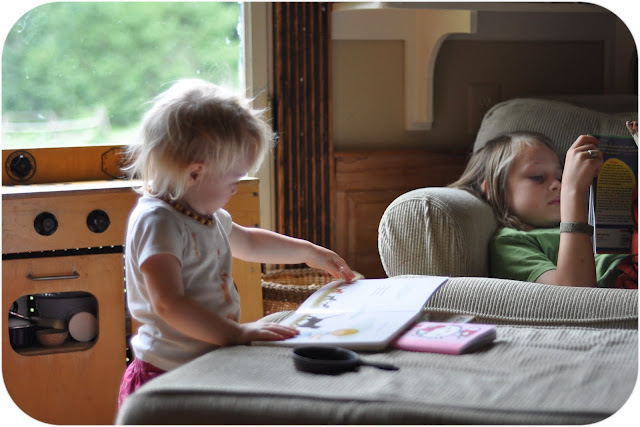 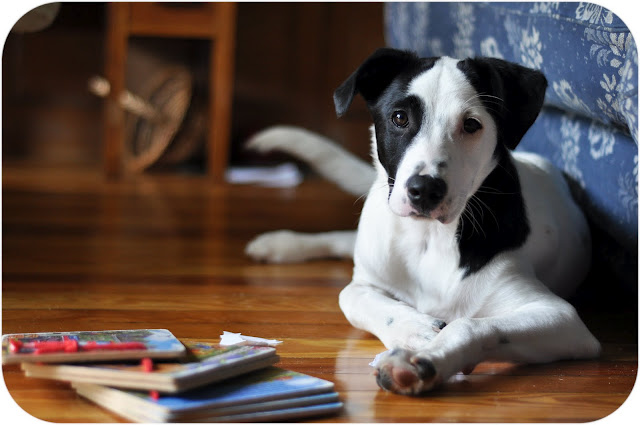 Trudy claimed this couch almost immediately after joining our family, so she is usually on it as well, although we have been trying to discourage it.  She’s a dirty dog! 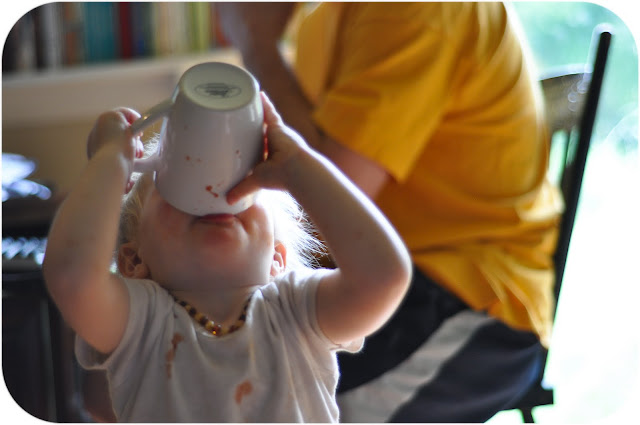 I am just giving Beatrix coffee when she asks to nurse, and that seems to be working.  Okay, so that’s not true.  Here’s the real story:
First off, the trip was one I committed to go on about six weeks ago. My friend Eve needed someone to ride with her to the Jersey Shore and babysit her youngest daughter while she attended a day conference with a friend of hers. She thought this would be a good opportunity for me to leave Beatrix for a couple of days if I wanted to try it, and also spend a day at the beach. Also, how often do I get the opportunity to sit and talk with a friend for six hours, which is what we did both to and from New Jersey? We would be staying with the friend that Eve was attending the conference with, a friend whom I have met and really like, and who also has two little girls that I knew Larkspur would love to play with.

Eve picked Larkspur and me up Wednesday evening. Beatrix knew something was going on and was really fussing and wanting me to hold her. I have left her home with Jonny lots of times for a few hours or more, but this time she sensed that something was different. She screamed and cried as we drove away, arms outstretched. Later Jonny told me that she cried for twenty minutes or so, which is not typical at all.
So, not a good start to the trip. Having a friend to talk to was a really good distraction though. Six hours later when we arrived in New Jersey, around 11 p.m. I called Jonny to let him know we had arrived safely. In the background I could hear Beatrix screaming, “mama! mama!” over and over. Jonny said that she was standing in the middle of the living room and wouldn’t let her pick him up, or put her on his back. This made me feel sick and my friends commented that it was good that I was so far from home, otherwise I would have gone back.

That night I only got a couple of hours of sleep between children waking in the night and the noisy street outside that I wasn’t used to. Larkspur also woke two and a half hours earlier than usual. So not a good start to the trip that I had built up in my mind to being this great sleep opportunity. I woke up painfully engorged and just wanted to go home. When I called Jonny to see how the night went, he told me that Beatrix had screamed for two hours initially before going to sleep, woke an hour or so later, screamed for another hour, and then finally slept. Of course she woke up her usual self, and was okay.

I spent the day exhausted, really uncomfortable, and missing my baby, but trying to focus on the fact that Eve, who has been really busy and stressed lately, was getting the opportunity to spend a day enjoying herself, and surely this would turn out for the best. And Larkspur was having a great time getting some time away with me, and playing with three little girls. I tried not to become an emotional wreck, between worrying, I am sure some hormonal issues, and sleep deprivation. It was very hard in the moment to stay positive though. I felt like I had made a huge mistake.

I went to bed that night earlier than I have in ages, and did actually get some decent sleep, more consecutive hours of sleep than I have had in years! to the point that I woke up with vertigo (is that normal?) When I called Jonny to check in he said that Beatrix had slept no problem that night, no screaming, but that he woke up at six a.m. and realized she had gotten out of bed, and headed downstairs to look for me. He heard her calling, “maaaamaaa, maaaamaaa!” He explained that I wasn’t home yet, fixed her a cup of kefir, and she went back to bed. She woke later and went on to have a great day. I spent the day at the beach and I used mind control to make myself relax a little. It’s hard to convince myself that it’s okay to slow down and just be sometimes. Larkspur had lots of fun with her new friends and I realized that this was really okay. But, even so, I was more than ready to head home later that evening.

I got home around 1 a.m. and climbed in bed next to my sleeping baby, despite my original plan to sleep downstairs. I just couldn’t help it. Beatrix slept straight through the night, and I found myself sitting up watching her sleep, willing her to wake up the next morning, I’d missed her so much. When she did wake up she didn’t ask to nurse for a few hours and I began to think that I would just go ahead and wean her. But, when she did finally ask, I let her nurse of course. The past two nights since I returned, I have slept in our bed, but traded places with Jonny who gives Beatrix a pat or two on the back when she wakes up and she has gone back to sleep without me. I am hoping that this trend continues. Sleep is a good thing! Beatrix is still nursing during the day, but without night nursing my milk supply is dwindling and so she doesn’t nurse for very long. I realize now that this is part of the reason my other children had weaned themselves by this age. Without night nursing, my body doesn’t make a lot of milk.

So, while the first twenty four hours were difficult, In hindsight I am glad I took the trip, and am grateful for Eve who was able to put up with my emotional self, and talk a bit of sense to me when I needed it. A couple of days ago, while we were still in New Jersey, I told her that I had learned an important lesson: I am not cut out to leave a child who is still nursing, and doing so was a terrible mistake. She told me that she felt that was only one of many possible lessons, and I realize now that she was right. This really worked out well in the end. I am okay. Beatrix is okay. I am not nursing all night anymore, and I am thankful for that!