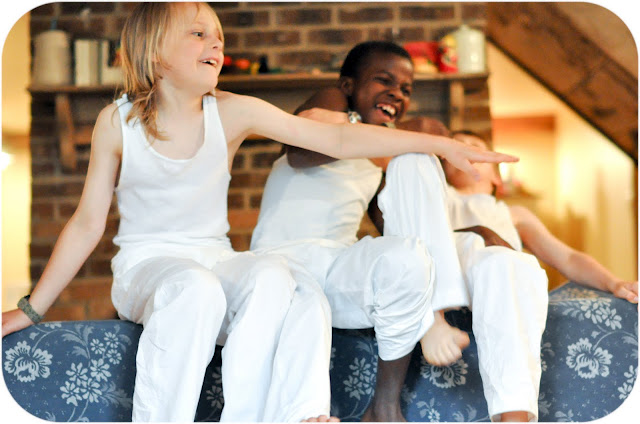 Joining Soulemama in sharing a moment from our week.
But, I’m breaking the rules.
My little boys are not so little anymore.  While they depend on me to make sure they wash their clothes before they run out of clean underwear and to keep up with their growing appetites, they are also incredibly independent, spending their days running in and out of the house:  playing, working, laughing, screaming.  Watching these brothers interact with each other, ignoring Gabe’s Liberian looks and accent, you’d be hard pressed to tell that he hasn’t been here forever (we are coming up on the 18 month mark), that he wasn’t born into our family, but into third world poverty.  We often speak of the time before each of our children were born, describing them as having once been “a twinkle in mommy’s eye.”  I like to think that Gabe must have been twinkling there too.
Tonight, Seth, in a moment of wild and craziness, pounced on Gabe and kicked him. Gabe, who has the self control of a saint, was actually upset enough that he punched Seth back.  Knowing my boys well, I chose to ignore the punch that Gabe threw, but sent Seth to his room.  As he headed for his room, Seth yelled over his shoulder, “Anybody want to play a game of chess?”  Gabe immediately smiled and yelled, “Me!” as he jumped up to follow Seth.
And that was that.
Boys will be boys, and I sure do love mine.
(that’s why I sewed the three of them matching white pajama pants-so cute on them!)
**If you haven’t entered my Princess in the Forest giveaway, there’s still plenty of time!