With great affection, I want to share a little story about my stepmom Jane, Larkspur, and Barbie dolls.
(For those who are new here, Jane was killed less than two months ago in a car accident.  You can imagine how hard this continues to be for my family.)
When Larkpur was just a wee baby I remember having a conversation with Jane that went something like this:  Jane asked, “Are you going to let Larkspur play with Barbies?”
I answered, “Ummm, no, probably not.”
Jane’s reply was a simple, disappointed, “oh.”
While she knew by this time that I have an aversion to plastic toys, she was hoping that I would make an exception for Barbie.  However, I didn’t intend to, disliking Barbie for many reasons including the whole plastic thing (despite the fact that I played with them as a kid and of course loved them.)
I’ve metioned here before that Jane sent my family boxes filled with clothing and other gifts several times each year.  When Larkspur was about two years old we received one of those boxes.  Digging through the clothes and gifts we discovered a Barbie, casually tossed in the box amongst all the other items.  Were I not a clever girl, I might have believed that she had gotten mixed in accidently; she wasn’t in a package, and didn’t appear to be brand new.  My younger sister Erin has quite the Barbie collection, and I am sure that is where this Barbie originated.  Of course Larkspur was over the moon when she saw this Barbie, Beatrix Potter Barbie, she was.  That evening I called Jane to thank her for the box and Jane casually inquired about the Barbie, asking whether Larkspur liked her.  Yes, of course she liked her, I replied.  “Oh, good.  I thought you would let her keep her since she’s a Peter Rabbit Barbie.”  I did let Larkspur keep it for a few weeks until she lost interest and forgot about it.
(I am laughing and crying while I write this-it’s such a strange thing to experience grief and laughter at the same time.)
Fast forward to February of this year, when we were preparing to take a trip to Disneyworld that my Dad had planned for all of us.  Jane sent a box a few weeks prior to the trip and told me that there would be a special Disney “doll” in that box, and to make sure that Larkspur brought it with her on the trip (there were also Disney nightgowns and t-shirts and probably more that I don’t remember.  Jane was very cute preparing for this trip.)  Larkspur has not been exposed to much Disney-and what she knows is from old books and now of course the Disney trip.  So when the box arrived and I discovered a Disney Princess Barbie inside, I just put it away while I spent some time mulling over what I would do with it.  Jane didn’t mention that Barbie again, and I actually forgot about it myself.  A night or two before the trip though, Jane mentioned that she would be bringing Larkspur a couple more Disney “dolls”, and would this be okay?  She was having so much fun getting ready for this trip, and I am always the type person who will choose someone’s feelings over something such as what toys I prefer my children to play with (as long as we aren’t talking something totally wicked or disgusting) and Jane really loved giving my kids toys.  I meekly asked, “Are they Barbies?”   “Oh, no-it’s a Snow White doll and the girl (can’t remember her name) from Toy Story.”  Both of these sounded quite possibly Barbie-ish to me, so just to be sure, I asked, “Do they have boobs?”  “Oh, no.  no boobs.”  “Okay, then that’s okay.”
Well, let me just say that those dolls did have boobs, and Larkspur loved both of them, until she lost interest and I gave them to “another little girl who doesn’t have many nice toys.”
A couple of weeks ago, when Larkspur was out in Jonny’s office rummaging around and she found the Disney Princess Barbie that Jane sent back before the trip.  I told her that it was a gift from Grandma and chose to let her keep it, considering that Jane won’t be sending her anymore Barbies.  It also felt good to say, “okay Jane, I’ll let her have this one.  See, you’re still giving your little princess gifts, even now that you’re gone.”
Then yesterday I remembered that I had a box of old Barbies, clothing, and other dolls in the attic, dolls that belonged to my mom and her sisters when they were girls, and that I played with as a child when I visited my Grandparents.  I am not sure how I ended up with them.  I decided to get them down for Larkspur.  At the very least she could change her Disney Princess Barbie into a handmade vintage Barbie dress, which really helps me to be more accepting of the whole thing.  I am not sure who made all those dresses, my grandmother I assume, but they really make me want to play with Barbies again myself. 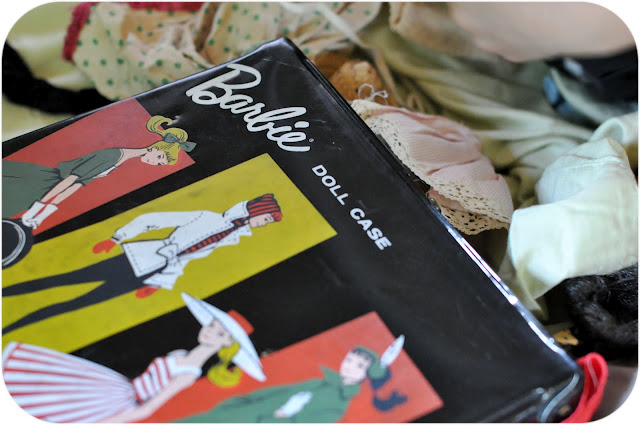 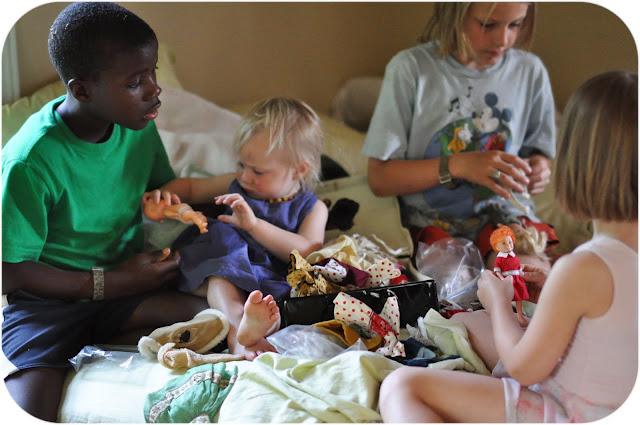 I should note that the boys were every bit as excited over that box as Larkspur was (or maybe I shouldn’t mention that.)  Seth stated that he thinks that the only reason that boys don’t play with Barbies is because they are afraid that other kids will tease them. 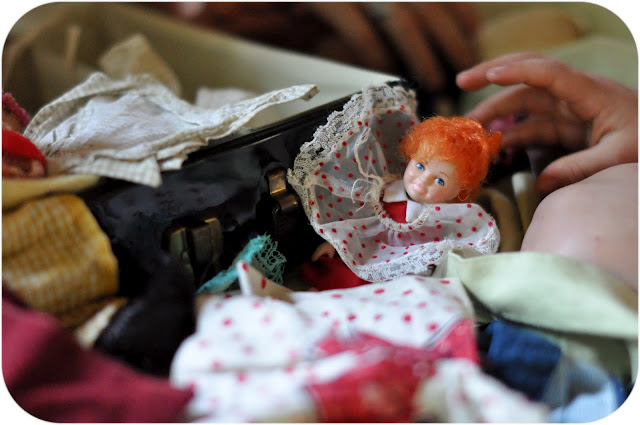 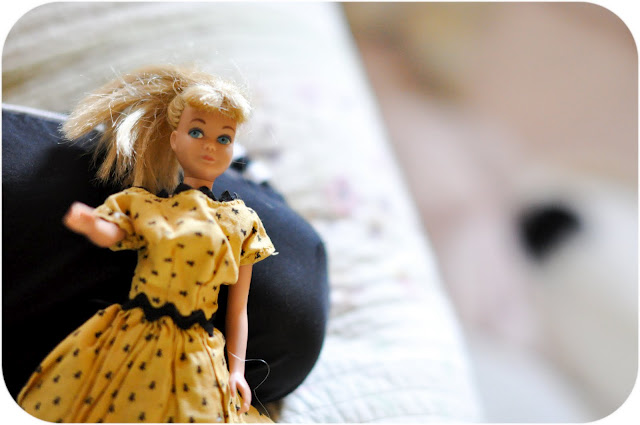 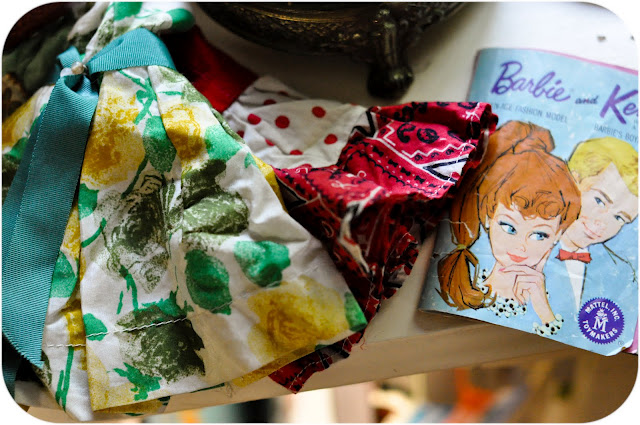 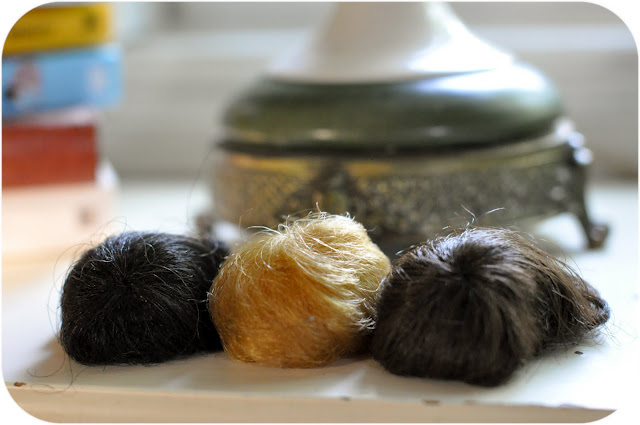 Wigs!  But-the bald Barbie is missing!  Where did she go? 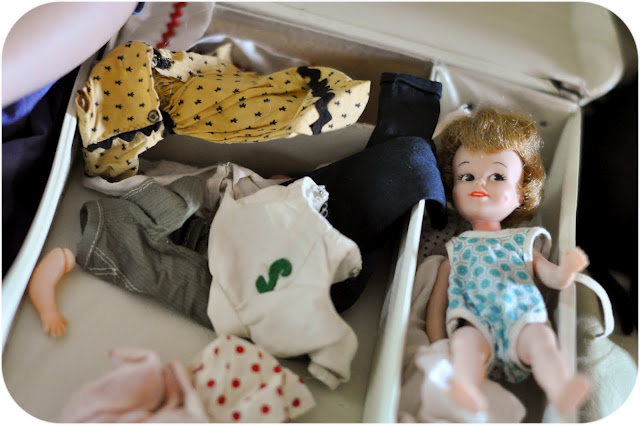 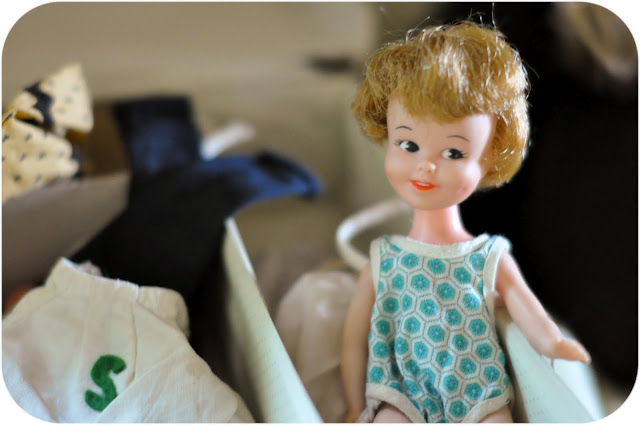 Does anyone know her name?  She is supposed to be wearing a little read and white dress (you’ll see it below.) 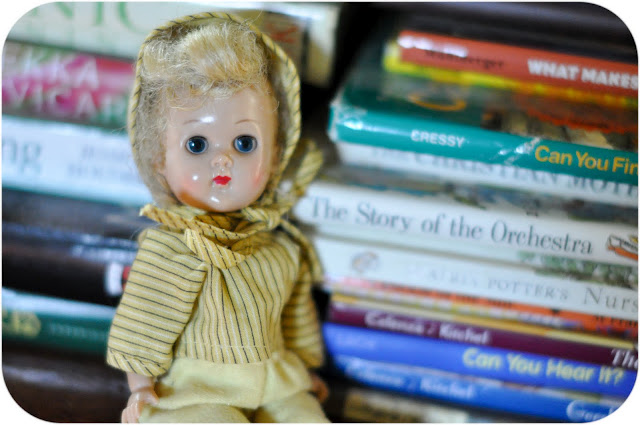 Here is Ginny, my namesake.  Have I mentioned here that I was named after the Ginny doll?  Yes, I was.
I actually put the three Ginny dolls away for safe keeping after I took their pictures. 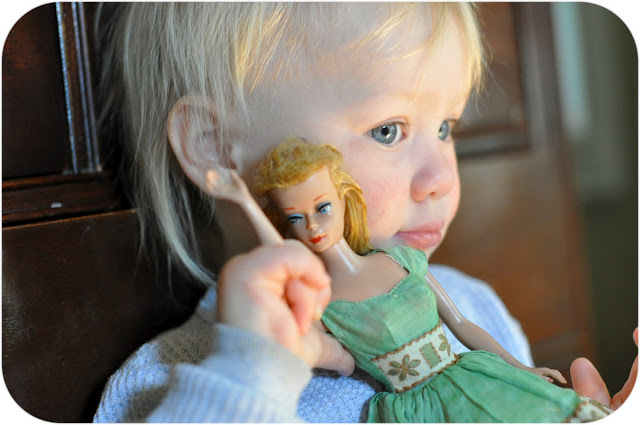 Barbies used to be so much prettier than they are now, even if they have always had a ridiculous figure. 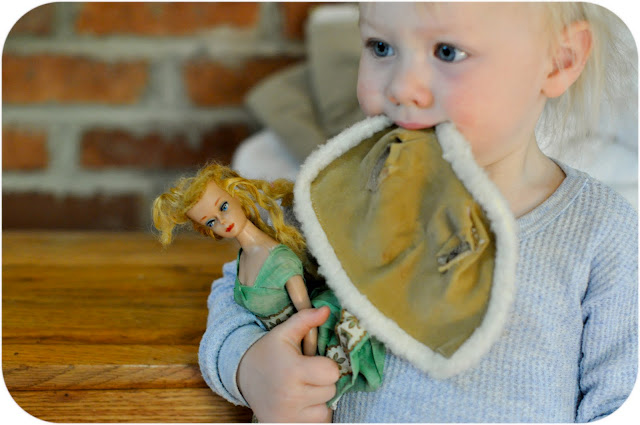 Everything goes in Beatrix’s mouth. 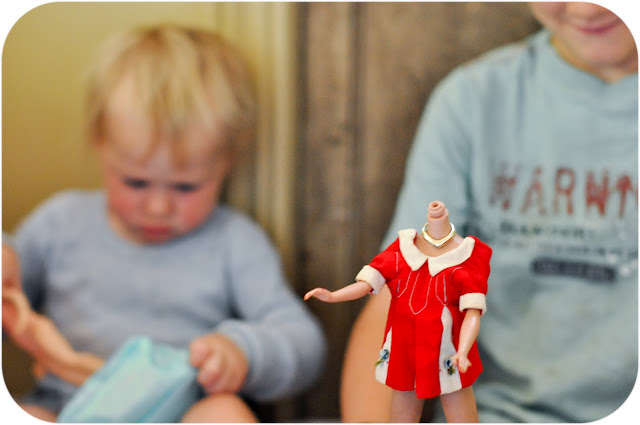 This is what happens when boys play with Barbies (and that is the dress that the doll I mentioned above is supposed to be wearing.)
So, do I let my kids play with Barbies?
Yes, I suppose that right now I do, and I know that would make Jane smile.