So, we have three chicks now.  Three, mostly black, fuzzy, adorable chicks.
And I must say, I like this method of raising chicks.  No brooder box, no heat lamp, just babies and their mama, all natural.  So far everyone seems to be doing well.  All three babies are eating and drinking and Mama seems to be full of motherly instincts. 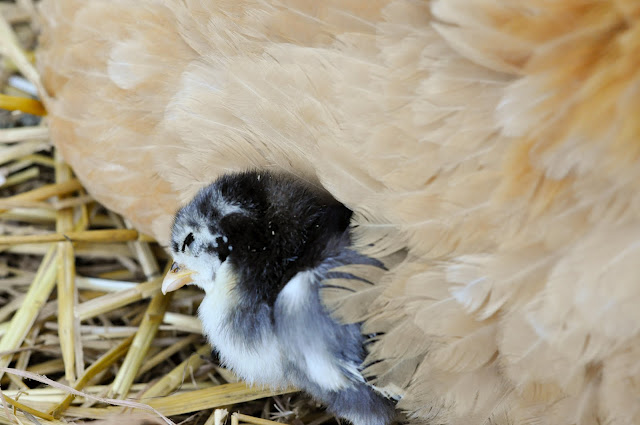 Here’s baby No. 1, Little Pip, snuggled up to Mama.  He looks like a pure Black Australorp, and I suspect he is.  Oh, and yes, we are convinced Little Pip is a boy.  I hope we are wrong about that part. 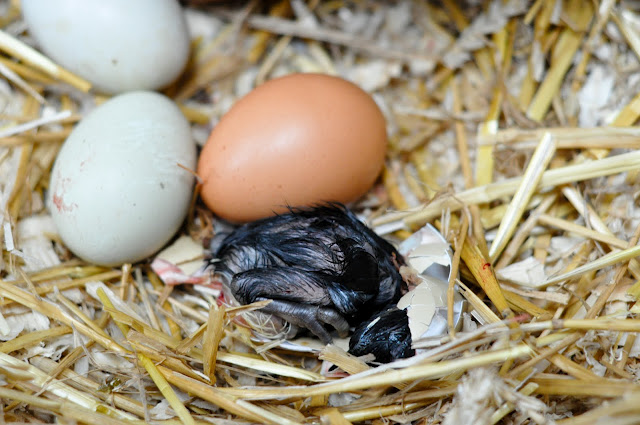 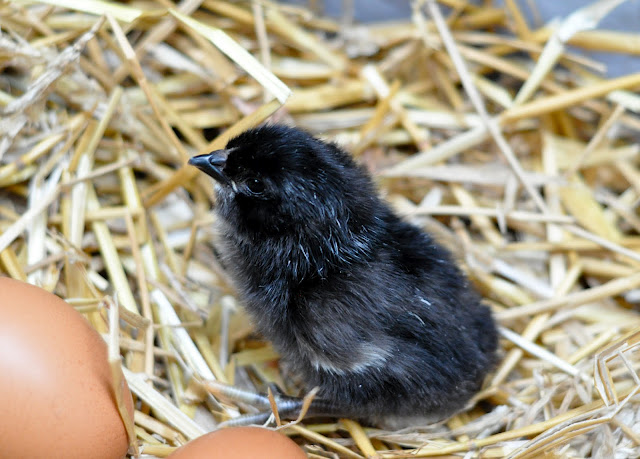 And here she (wishful thinking on the she part) is, all fluffy and glossy and dry.  She is so sweet and soft and reminds of a baby bunny for some reason.  I realize that doesn’t make any sense.
We know she is half Black Australorp (daddy) and half Ameraucana (she came from a green egg.)  I can’t wait to see what she looks like when she grows up, but she better not pull a Harriet on me. 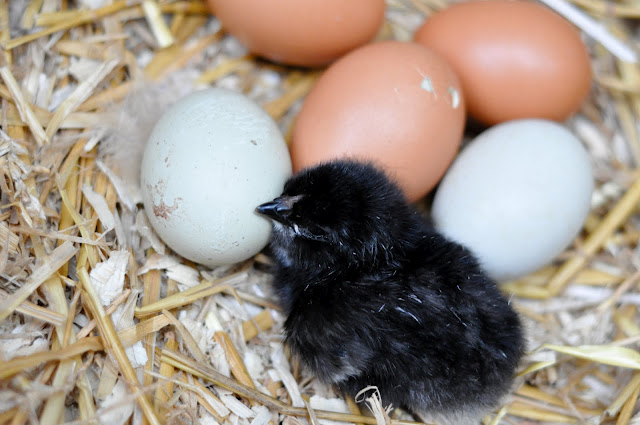 Now, if you look behind her, you can see a couple of holes in another egg. 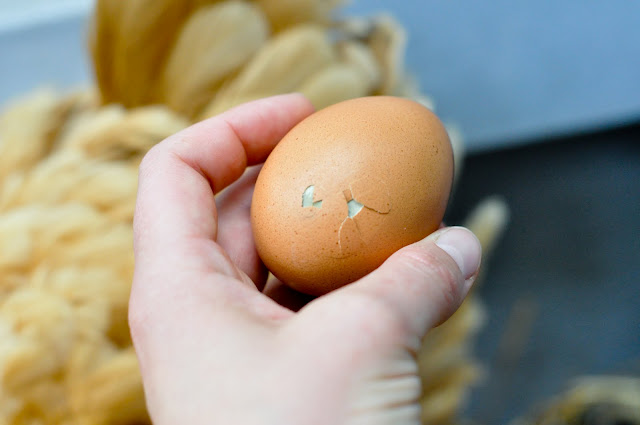 Baby No. 3 trying to escape! 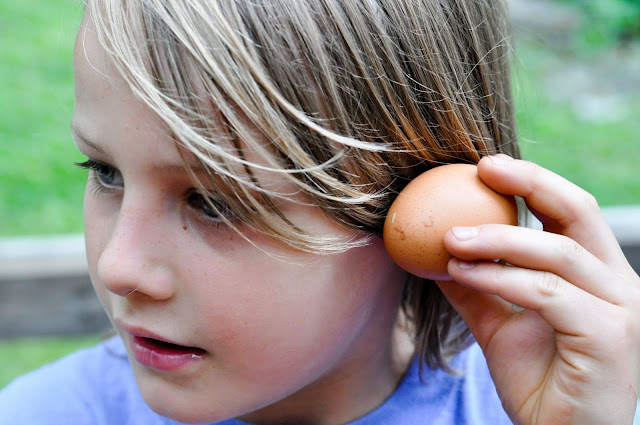 How amazing to listen to the baby, pecking and peeping, from within the shell. 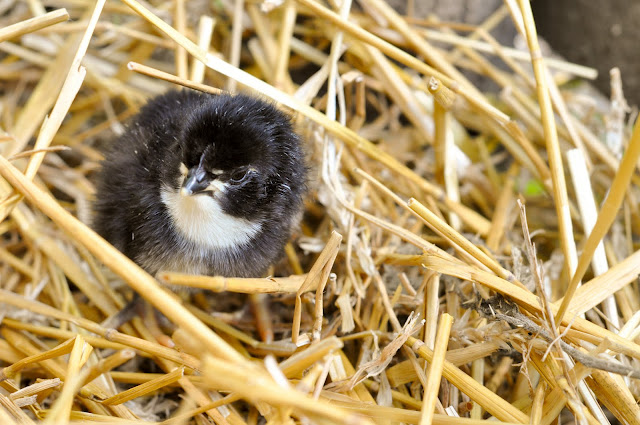 And the next morning, this beautiful little thing had joined the others.
This chick is a definite mix, just like No. 2, but we aren’t sure who her biological mama is. 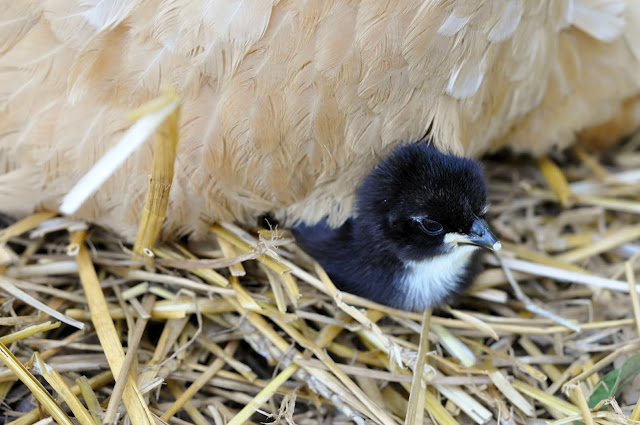 Her markings are very even and striking.  I can’t seem to remember her name.  I am sure it is “Little” something or other. 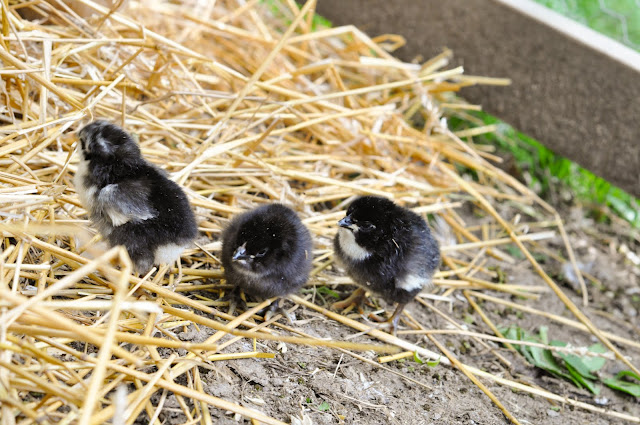 The three babes, lined up by birth order left to right (coincidentally-no I am not so weird that I lined them up that way.) 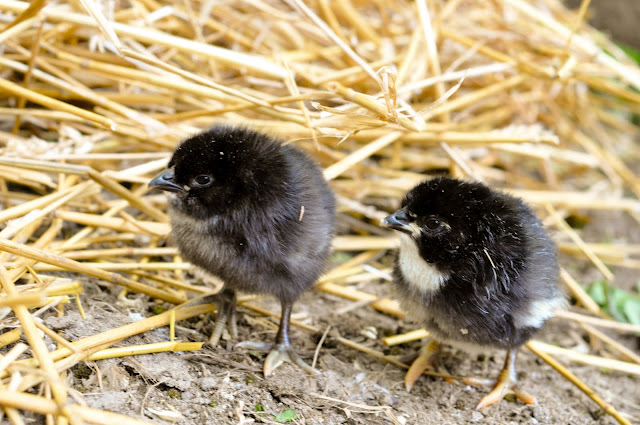 Okay, now for a chicken lesson, courtesy of some friends of mine.  To be honest, I have only read one book on raising chickens, (Keep Chickens! Tending Small Flocks in Cities, Suburbs, and Other Small Spaces

) and if there is a section on broody hens and raising chicks the “natural” way, I missed it, or have forgotten that part.
I realized today that I had no idea how hens typically hatch and raise chicks.  Our broody hen started sitting, and in those first few days, several other hens obviously (there were green eggs mixed with brown ones in the nest) laid eggs in her nest box too.  She ended up with seven eggs total.  I didn’t put much thought into how the process would have played out if she were isolated from the other hens.  I didn’t think about the fact that a hen can raise a dozen or more of her own chicks and how that would come about.  If I had thought much about it, I would have become very confused.  I am trying to figure out how to explain here what exactly I thought happens, but I don’t know how to do that without being really confusing.  So I will just stop right now, and tell you what I was taught today:
When a hen gets broody, she will create a nest and begin to lay one egg per day in that nest.  Each day when she lays her egg, she will turn the eggs that she layed previously.  Finally, when she has what she believes to be a sufficient number of eggs in her nest, she will begin to sit on the eggs day and night.  The chicks will hatch about 21 days later.  Typically, not all of the eggs will be viable, and two or three days after the chicks hatch, the mother hen will abandon any remaining eggs in order to care for her chicks.
So in our situation, I think our Mama hen only had one egg of her own, and then her friends were kind enough to donate their eggs to her, by laying them in her nest box.  We should have marked the eggs she was sitting on with the date they were laid (I was told to use a pencil-not a sharpie or other marker) so we could keep up with when they should hatch, especially considering the fact that some of the eggs were laid several days or more after Mama starting sitting on her first egg.  In fact, I think an Ameraucana laid that seventh egg just days before our first chick hatched.  We really need to become better record keepers.
Our Mama Hen abandoned her remaining eggs after the third chick hatched and we made the terrible mistake of cracking open one of them, assuming it was a dud.  It wasn’t, and I won’t say more than that.  That was a terrible regretful experience.  We placed the remaining three eggs under one of our Black Australorps who is now broody, and we shall see what happens.  I am hoping that they will hatch in the next couple of days and that we can convince Mama Hen to adopt them.
So, we learn a little more every day.  I’ll keep you posted.