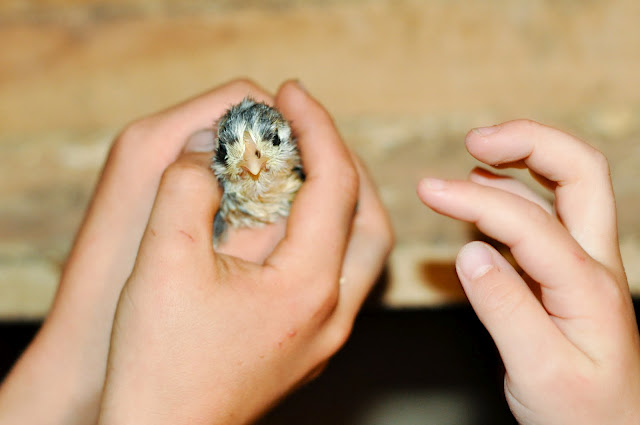 About three weeks ago one of our Buff Orpington hens went broody.  Rather than do any research on how best to handle broody hens and their eggs, we just let things be.  We monitored how many eggs she was sitting on, cleaned up when one broke, moved her back to her original nest box when she switched boxes, and waited, not really convinced that she would ever produce a chick. 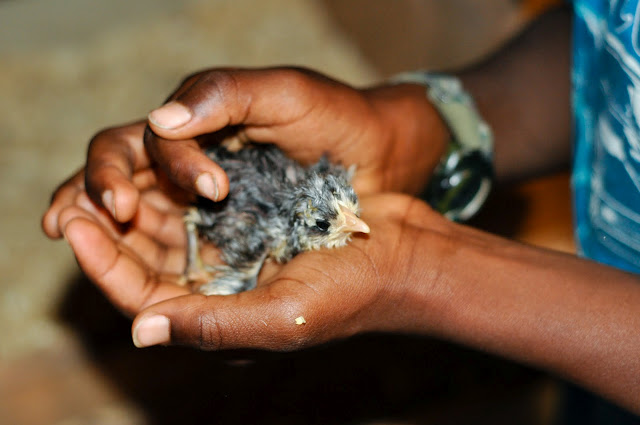 Last night when I went out to check the chickens’ food and water, I heard an unmistakable peeping coming from underneath Mama Hen.  I carefully lifted her up, confirmed that there was indeed a living chick, and then raced to fetch my family and my camera.  After everyone got a quick look at the chick, we headed back inside to try to figure out what to do now.  I found THIS very helpful article on how to raise chicks with their mother.  Of course I read too late that you shouldn’t handle a wet freshly hatched chick.  Actually this seems like common sense to me, but you know how kids are. 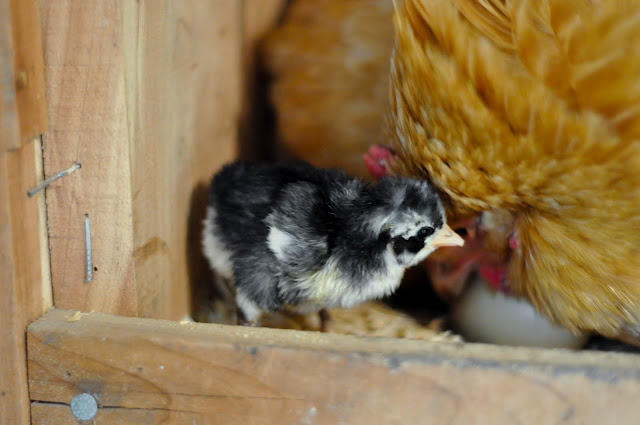 This morning, first thing, I went outside to see if the chick had survived it’s first night.  I found it sitting at the front of the nest box, all fluffy and cute.  Mama Hen was turning and rearranging her remaining eggs. 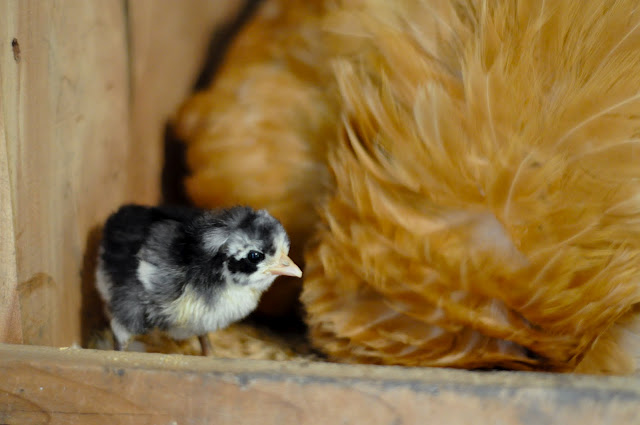 She spent a few seconds doing that, making sure they were situated how she wanted them. 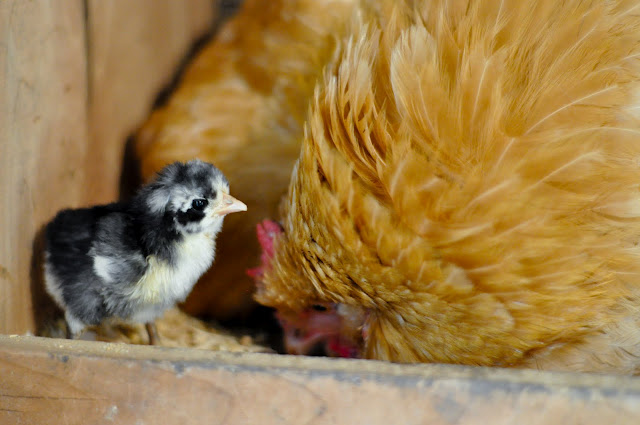 Then she turned her attention to her chick, who was a little too close to the edge of that nest box. 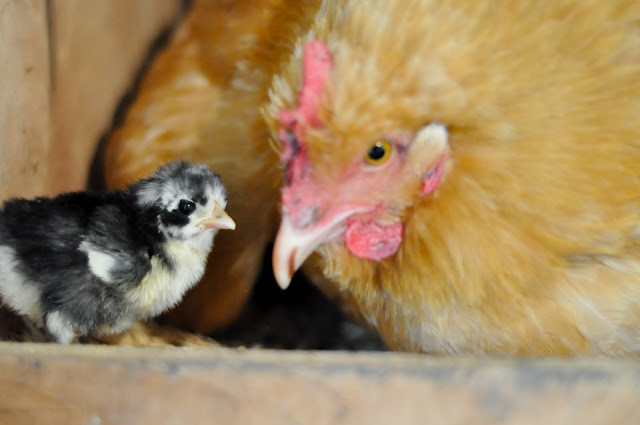 She reached over it’s little body, 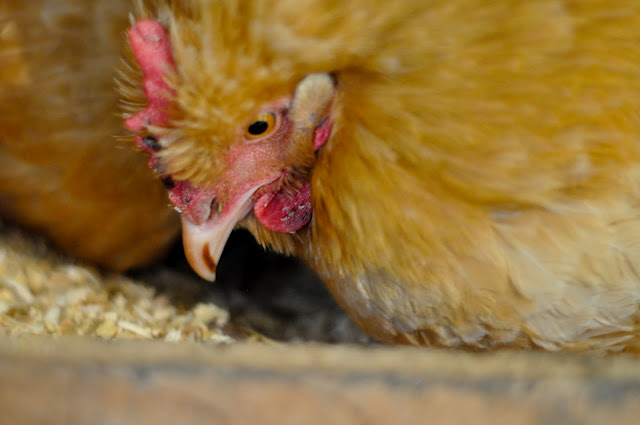 and tucked it under herself. 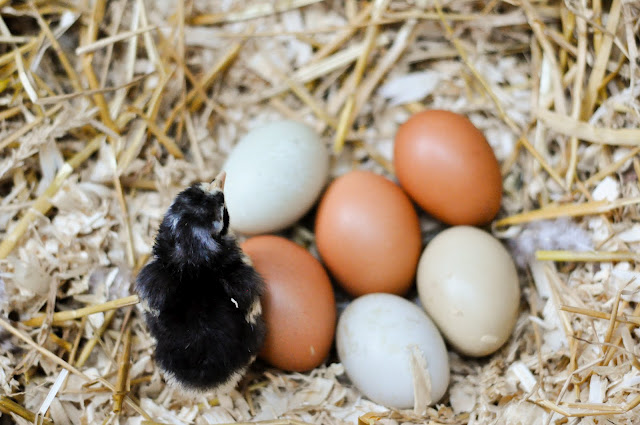 Another important fact that I read in that article (again-after the fact), was that broody hens should be separated from the flock.  This makes sense on many levels.  Especially considering that the other hens have been laying eggs in with Mama Hen (they must have sat right on top of her to manage this), hence the three Ameraucana eggs in the bunch.  I think two of those eggs were just laid a couple of days ago, so there isn’t really any hope for them.
Today Jonny (with the help of a friend) sectioned off part of the chickens’ run and created a private home for Mama Hen and her baby.  We moved the remaining eggs first, and then the baby. 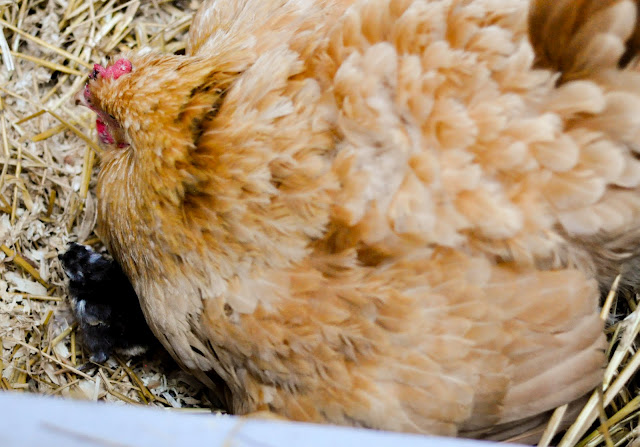 Finally, Keats carried Mama Hen in to her new home.  She was pretty unhappy with the situation, but very quickly settled herself on her eggs and started to tuck her chick underneath herself. 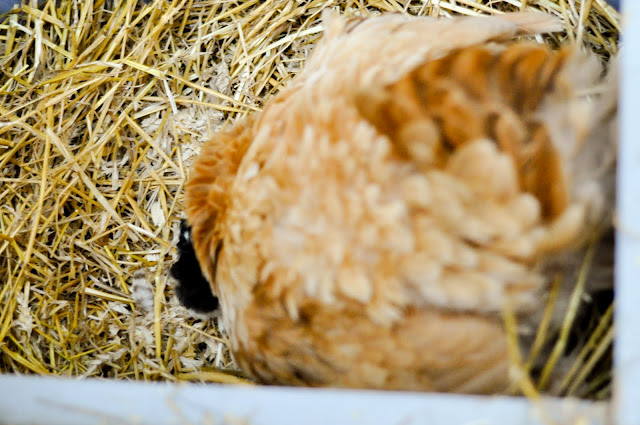 This was the most amazing thing to watch;  this incredible inborn mothering instinct in action.  Makes keeping roosters so worth it!
I do so wish they were Buff Orpington Roosters like Mama, but both of ours are Black Australorps.  I shouldn’t complain though because neither of our remaining roosters (we unintentionally started with four) is aggressive. 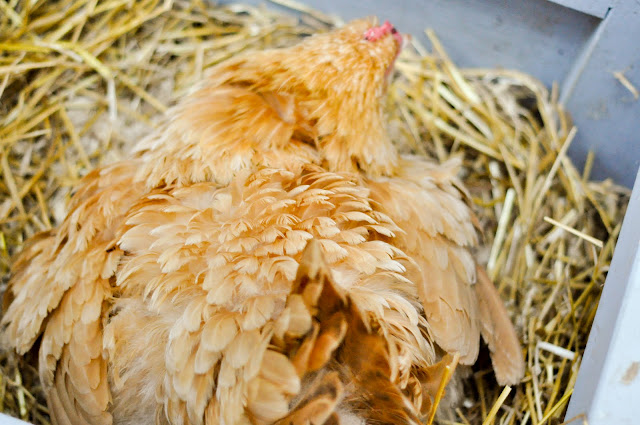 Here is Mama with baby and eggs tucked safely beneath herself.  I honestly don’t have high hopes for any more eggs to hatch, but we’ll see.  Based on the article I read, we will dispose of any that haven’t hatched in a couple of days.  I do so hope that the baby survives!  It is up to Mama at this point; we have her little run set up with food and water, and hopefully she will bring her baby out to eat and drink in the next day or so.  I’ll keep you posted!