I learned to knit about five years ago, but didn’t really start knitting regularly until about a year and a half ago.  My motivation to pick up the sticks again was my pregnancy with Beatrix and my desire to knit her a tiny little hat.  So, I headed to my local yarn shop and was given a quick lesson in knitting in the round along with a basic formula for knitting a hat.  I know several of my friends have recently picked up knitting and at least one has asked me for a hat pattern.  I typically don’t follow a pattern, but rather a formula.  So, I am going to attempt to share with you what I was taught, and the way that I knit a basic hat, in the round.
I think that it is good to master a basic hat and understand the math behind the pattern before moving on to more complicated things.  Okay, I should say that I think that has been good for me.  To each her own.
I will probably work on this through several posts.  I want to start as basic as possible, and then move on to extra details.  For this first post I won’t really talk about how to actually knit a hat, only how to come up with your formula.  This is not an exact science, and I think I learn a little with every hat I knit.  For instance I made Christmas hats for six kids this year, and the first couple of hats I made didn’t fit quite as nicely as the last four did.  I used the same yarn just different colors for all the hats and really got a good feel for the way it knitted up for me in the process.  The important thing is that all hats made are functional and keep heads warm.
Anyway, here’s the deal:
1.  Choose your yarn.  I usually use something worsted weight for hats for children and adults.  Next get a 16″ circular set of needles.  Bamboo, wood, nickel plated, whatever you have/want.  You are also going to need a few other supplies such as a set of double pointed needles in the same size as your circular needles.  Make sure they aren’t too long.  I think mine are all in the 6 or 7 inch range.
2.  Now you need to figure out your gauge with the particular yarn you are using otherwise the formula won’t work.  I am a pretty consistent knitter and can get away with just knitting a little 4X4 inch swatch in stockinette stitch.  (K a row P a row) and then measuring how many of my stitches equals an inch, rather than casting on a bunch of stitches, joining in the round and knitting around a few times to get my gauge.  It’s up to you.  The bottom line is that you need to know how many of your stitches equal one inch in stockinette stitch (when knitting in the round every single row is knit-no purls).  Gauge is important.
3.  So let’s say your gauge is 5 stitches to one inch.  Now, you are ready to make your formula.  Either measure the head circumference of the person you are knitting your hat for, or decide a basic size such as a hat with say an 18 inch circumference.  All you do is multiply 5 (stitches/inch) x 18 (inches) = 90 stitches that you should cast on, give or take a few.
4.  I say give or take a few because you need to take into account the type brim you want on your hat and the numbers need to work out evenly.  If you are doing a rolled brim hat this won’t matter because you just knit every stitch.  But, if you want say a K1P1 ribbed brim, you  need a multiple of 2 so that you can start with a K and end the round with a P.  What if you want a K2P3 brim?  Then you need to cast on a multiple of 5.  K2P2?  cast on a multiple of 4.  So if you start with 90 stitches and you know you want to do K2P2 brim, you are going to have to adjust that number a bit.  You’ll either have to go with 88 or 92 stitches.  See what I mean?
4.  I also try to make the number of stitches I cast on be divisible by either 8 or 9 for a nice even decrease at the end of the hat, but that isn’t necessary.  But since I like everything to be even, if I were choosing between 88 and 92, I would go with 88 since it is divisible by 8.  That way once I am finished with the body of my hat (I have knit an inch and a half or so of K2P2 ribbing for the brim and then maybe four or so inches of stockinette for the body) I can start my decreasing with a K6 K2 together decrease round. But more about that later.  Must go to bed!
If I get enough feedback, I will continue with this little hat series soon.  Please feel free to ask any questions, or to correct any mistakes you see here.  I certainly don’t want to lead anyone in the wrong direction, and like I said, I am still a beginner! 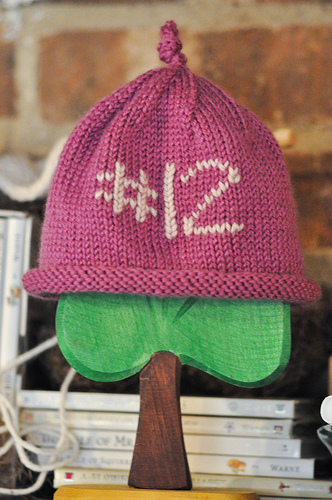 Simple little hat, knit for a friend’s baby shower.  She is expecting her twelfth baby any day now.  We had a lot of fun with the theme of this shower! 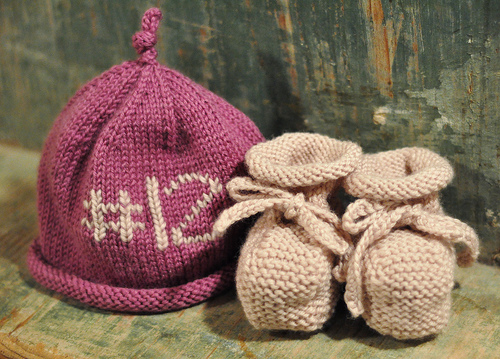 Last minute I got overly ambitious and decided to knit her a pair of booties.  This was something new for me and they were fun to make.  These were knit in the round on double points and were not difficult although they took me longer than I expected. 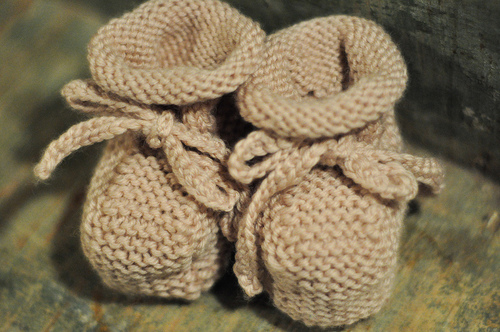 I think they are a little funny looking, but anything this little is cute.  Makes me want to have a baby.  No, that is Crazy talking.  Not yet.  Anyway, these are supposed to actually stay on.