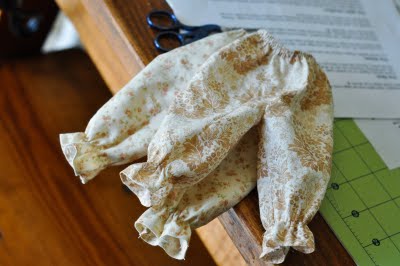 I spent Sunday afternoon working on my rag dolls while Jonny and the kids hit site 5 for some fossil hunting. 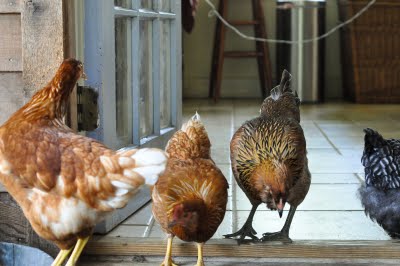 I am not very good at staying focused and found my little feathered friends to be a good distraction. 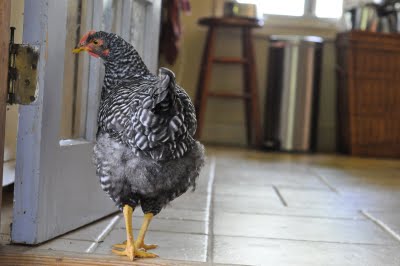 I got a stern look from Jonny when he saw these pictures. He doesn’t approve of chickens in the kitchen. 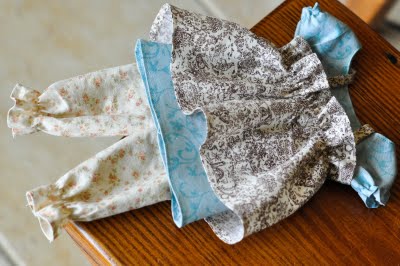 This was my first time sewing doll clothes and while it was sort of tedious, the cute finished products made the effort worth it.  These little clothes were more time consuming to make than I expected, but I did manage to make one dress, two pinafores, and two pairs of bloomers before my family returned and it was time to head to the sinner’s Mass (my friend Eve once told me that the 5 pm Mass on Sunday is called that, and the name stuck with us).
Now I have just got to put the faces on my dolls and assemble all the parts.  For some reason I am putting off sewing the faces.  The face really makes the doll, so there is a lot of pressure to get it right.  This type of face is harder than a basic waldorf doll face because there is more involved.
And on to Monday, 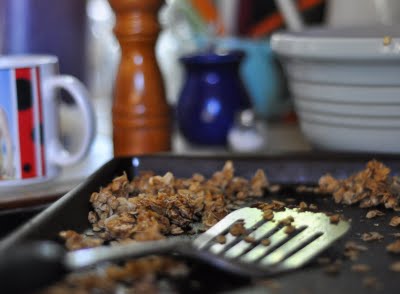 I know I’ve mentioned before that we don’t eat breakfast cereal except for the occasional bowl of Cheerios for a snack.  This means that we eat a lot of oatmeal because there isn’t time for homemade biscuits by Jonny every morning.  This also means that my kids are sick of oatmeal.  I really could eat it every day with a bit of honey and milk, but they would almost rather skip breakfast than eat it.  So my compromise is granola.  I use a very basic recipe from the Bread Beckers.  The kids eat it over vanilla yogurt and are happy.
Simple Granola:
1 stick unsalted butter
1/2 cup honey
cinnamon to taste
1 tsp or so vanilla
4 cups rolled oats
Preheat oven to 400 degrees.  Melt butter in saucepan, add honey, bring to a boil and let it bubble for about a minute.  Remove from heat and stir in vanilla.  Toss oats with cinnamon in a large bowl and then add honey/butter mixture and stir until the oats are evenly coated.  Spread on a baking sheet and cook for about ten minutes.
This is good on yogurt or with milk. 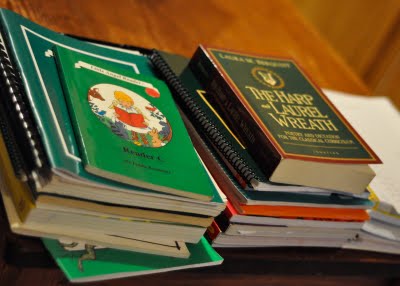 We are in our fourth week of homeschooling so I guess things are full swing now.  Homeschooling three when two of the three are in kindergarten and first grade, doesn’t feel much different than homeschooling one.  Sort of like once you have a few of kids, what’s a couple few more?  Life is actually so much better with this bit of structure.  The kids are doing their work (I won’t pretend they never complain) and I am not freaking out.  In fact, this bit of structure has helped me to become even more structured which is super great.  I even have all five older kids having a rest time which is a big accomplishment for me.  Too bad Beatrix doesn’t believe in rest.