Today we took the kids to our favorite state park to hunt for fossils. We met my friend Lori and her kids there. The punk (just kidding, he was nice but ridiculous) in charge of collecting parking fees tried to charge both Lori, who drives a Sprinter, and Jonny and I who drive a passenger van, the bus price. We straightened him out and reminded him that it isn’t nice to discriminate against big Catholic families who drive large vehicles. We should not be lumped with schools and church groups and charged five times as much money for crying out loud. We need to buy our yearly pass and be done with it. This is the second time I have had this happen in the past few weeks.
The kids had a great time, especially because they got to play with friends. We ended the day by stopping at the berry farm to pick blueberries. Only, blueberry season is over in our neck of the woods it seems, so we ended up picking just enough blackberries to make one pie per family. I will do that tomorrow.
And now for random photos: 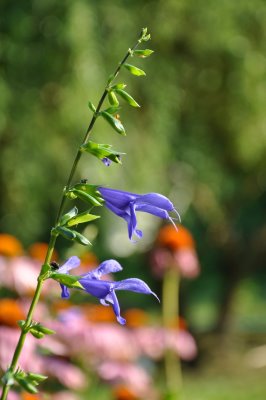 Salvia guaranitica, my favorite. I am a huge fan of blue flowers. There are many varieties of S. guaranitica, can’t remember the name of this one, but it is the most common one sold. I have a beautiful pale blue one that just started blooming as well, I believe it is called Argentina skies… 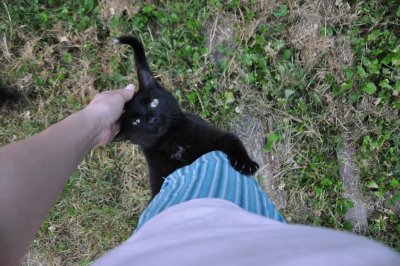 That’s Winifred on my leg. It hurts when she does that. 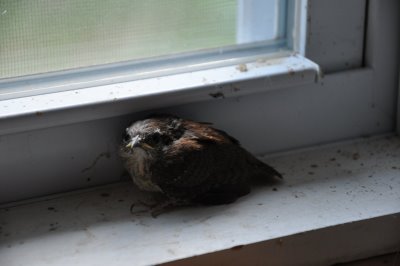 I discoverd a very large family of Carolina wren’s living in Jonny’s wood shop this evening. I spent about forty five minutes trying to “rescue” the babies, until I realized that if they really needed rescuing, they wouldn’t be alive at this point. So instead I grabbed the camera and tried to get pictures, but it was just too dark. How I long for some new lenses and the knowledge needed to use them. 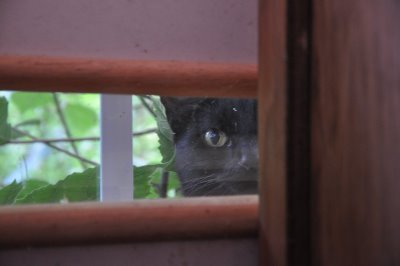 That’s Winifred peering through the window. Just below there is a baby bird hopping up and down. She was watching and wishing, I assume, that she could eat the baby bird.