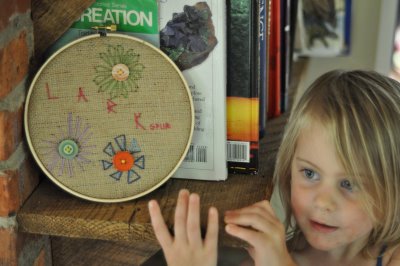 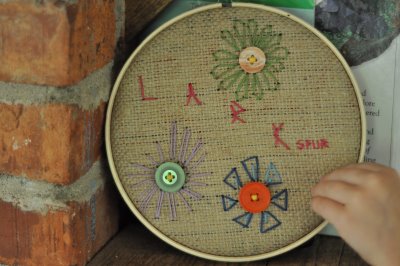 Larkspur has taken after Keats in that she frequently whines to me, “I need something to do!” This is in stark contrast to Seth who never seems to be bored. He can always find something to occupy himself. We had a strangely peaceful afternoon today, and I was able to do some “stitching” with Larkspur, who desperately needed something to do. I save my big rice bags and cut them up for the little kids to practice embroidery on using large plastic needles. Larkspur chose pink floss and we sat down together to play. We worked together; she dictating color, letters, and placement, while I threaded the needle over and over and over again. Towards the end she was doing a bit better at keeping her needle threaded, and I just told her where to put her needle. The process was pretty spontaneous in that we started with just an “L” and then she decided she wanted an “A, R,K” and then decided that it really needed to say Larkspur, hence the strange way her name appears. Larkspur was so thrilled with this little project that she even asked Jonny to write a song on the piano called, “Larkie has a picture.”

And totally unrelated-I always freeze really ripe bananas for smoothies, but recently the kids discovered that frozen bananas are really yummy. I had forgotten that. I remember eating them as a kid too, and loving them. Now these days I’d rather walk barefoot on broken glass or even slide down a razor blade into a pool of lemon juice rather than eat one. Something about biting into frozen things makes me really cringe and that is an understatement. Admittedly the razor blade comment is maybe an exaggeration though. I was just having a “would you rather” flashback. Ever play that? My mom played with my sisters and I when we were kids, and we sometimes play with our kids during emergencies. Honestly it’s not the best game to play with little boys though, because they quickly turn on the potty humor and then we have to quit. But, back to my point: Freeze some ripe bananas for your kids. They might really like them. Easy healthy snack that they are fooled into thinking is a treat.