*This is a long post, and probably not very relevant to many of you who read this blog. However, I wanted to write this all down and have sort of a record of our dog Okee’s life because she shared the early years of my marriage and was with us through the births of our children, our college years, our big move away from our families in Georgia into our first house,etc. I also wanted to share with my family, because they all knew Okee as well. Putting Okee to sleep led Jonny and me to look back over the past ten years, and it was nice to pull out all the pictures of Okee from those years. I think my family will enjoy seeing the pictures. So if you don’t feel like reading, you can scroll down to see lots of pictures!

Jonny and I adopted Okee on April 5, 1999 about a week after returning from a trip to the Okefenokee swamp (hence her name). Okay, shoot, I am already crying.

We had not even been married for six months yet. We actually went to animal control to look for a kitten. We were told that the county shelter actually didn’t handle cats so we decided to go look at the dogs for the heck of it. I am not sure what we were thinking because we already had two dogs, the two I had brought with me from home when I went off to college.
I noticed Okee because she acted so terrified and pitiful. She was probably about 6-8 months old and stood right up against the chain link door to her kennel just shaking with fear. Jonny and I decided to adopt her that same day (you don’t have much time to make a decision in these cases, because an animal you see at animal control one day may be euthanized by the time you come back the next).
My two dogs Bear and Simon were both older and honestly both sort of pains in the rear. Bear was in diapers for incontinence in her old age and on meds. She also had a very demanding and entitled personality, and she was constantly getting into things. My mom had wanted to euthanize her b/c of her health problems, but I volunteered to take her to college with me and deal with them myself. Simon on the other hand was very high strung and a major flight risk, and he eventually went back home and became my mom’s dog. 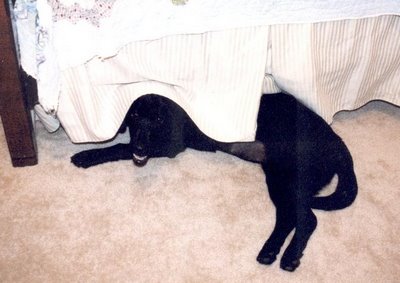 She had only been with us for a couple of weeks at this point. She still looks like a puppy. 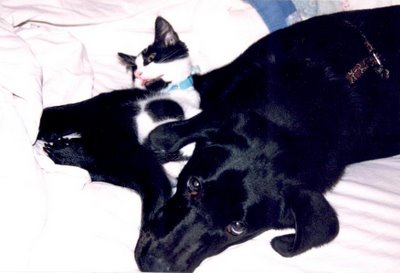 Okee with Naven, the kitten we adopted shortly after adopting her. 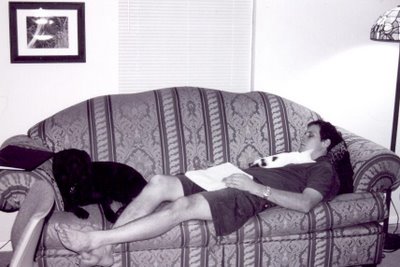 Jonny passed out studying with Alley Cat and Okee. 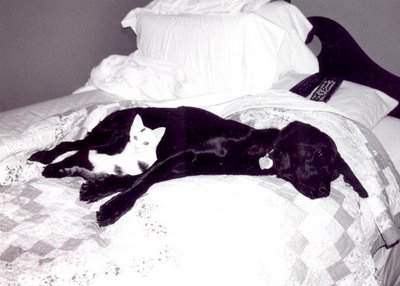 Okee and Alley Cat. Alley was the last cat we adopted before moving to Virginia. The neighborhood kids found her under a dumpster along with a pile of kitten supplies. Someone had literally thrown her away. Of course I was brought all stray animals and even injured wildlife, so the kids gave her to me. 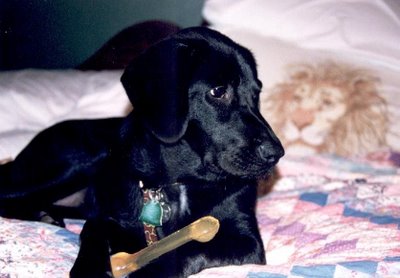 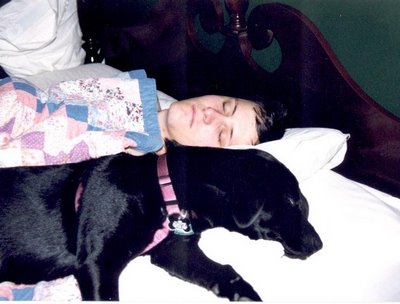 Jonny and Okee sleeping. Remember back before having kids when you could just lie down and take a nap whenever you pleased? 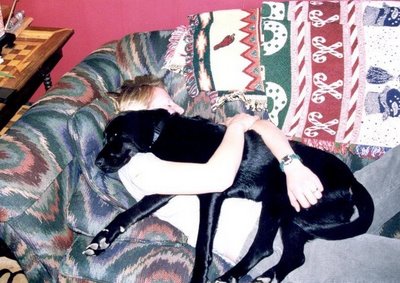 I think this was some holiday that we were at my in-laws house to celebrate. 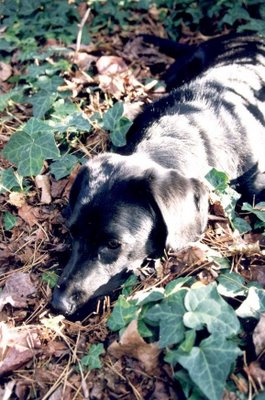 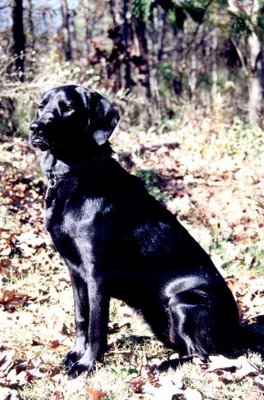 These pictures are from a bunch I took trying to get the perfect one of Okee for Jonny’s birthday gift. I actually couldn’t find the 4×6 of the one I ended up using. 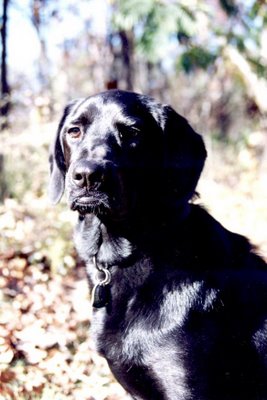 Look at that underbite! Her bottom lip always stuck out, and because of the underbite most of her front teeth ended up falling out over the course of her life. 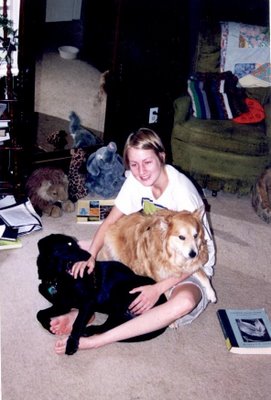 This was just a few months before I found out I was pregnant with Seth I think. We were such kids. I like the combination of textbooks and stuffed animals. That’s Simon in my lap along with Okee. 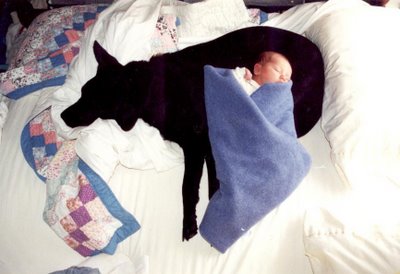 Seth is born! No we didn’t actually leave him unattended sleeping on Okee. That was just for a picture. 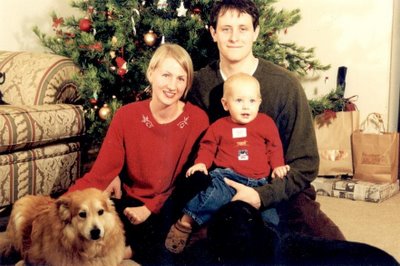 This was our first ever official family Christmas picture. That is Seth when he was about 14 months old. You can’t see Okee very well, but she is sitting right in front of Seth. 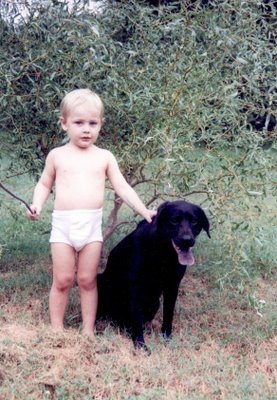 This picture was taken right after we moved to Virginia. We brought the corkscrew willow tree in the background with us from Georgia. Seth was almost two years old when this was taken. 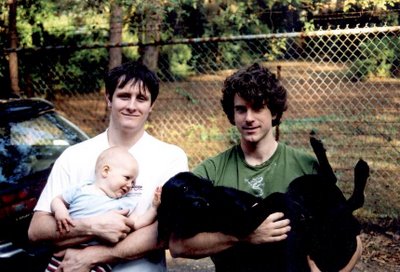 Jonny is holding Keats in this picture, so it is about 18 months after we moved from Georgia. We had traveled back to Georgia to visit family and friends. That’s our friend Thomas holding Okee. He and his wife Summer are two of our best college friends. 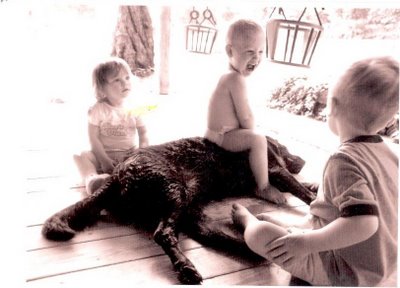 This is on our front porch about four years ago. My friend Lori actually took this picture. That’s Keats sitting on Okee (I doubt he was allowed to sit there for longer than it took to get the picture. We don’t let our kids hurt the dogs, although Okee doesn’t appear to care!) The other kids in the picture are Lori’s (back when she only had two-now she has four!) 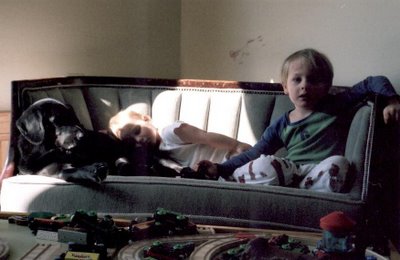 Seth and Keats sitting with Okee. It is early in the morning I guess since they are still in pajamas and it looks sort of dark. 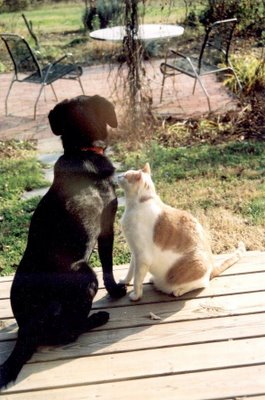 Okee sitting on the back porch with Willy. Willy was my first cat whom I actually got just before going off to college. He and Okee were friends, and while Willy has some bad habits that have made him an outdoor cat, he was always quick to go visit with Okee when she was outside.

Frankenstein stitches! This was right after her surgery (luxating patella repair-actually pretty common). 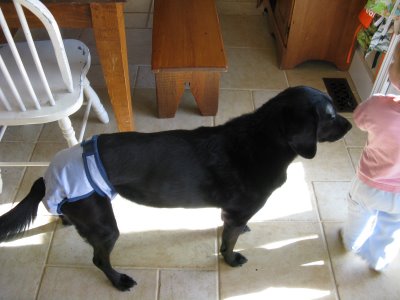 This was taken in January of this year, not long after we had to start putting Okee in diapers. The meds she was on for the fluid retention made her need to go to the bathroom all the time,and she got a bit leaky. She looks really good in this picture though. She was skinny but not horribly so, and she wasn’t bloated looking yet. 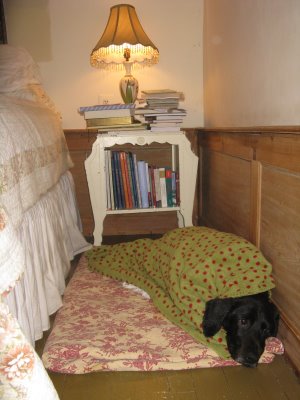 This is Okee after a bath not too long ago. She had gotten so thin that after a bath she would get so cold her teeth would chatter so I would wrap her in fleece blankets. She actually stayed wrapped up like that for hours. 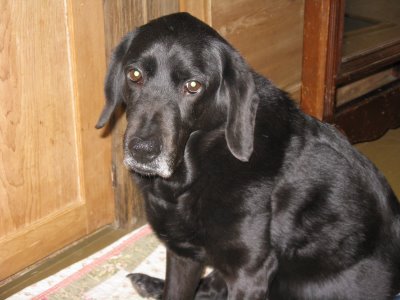 Here she is just looking sort of pitiful. 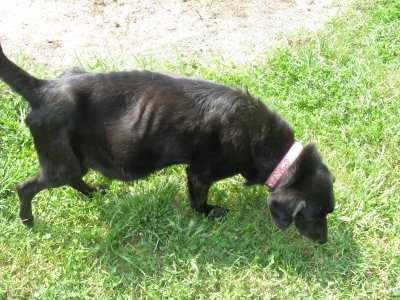 This was actually taken the day we had her euthanized. You can see her bones and her swollen stomach. 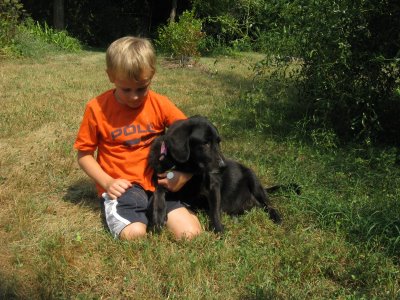 Seth sitting with Okee in the backyard for final pictures. 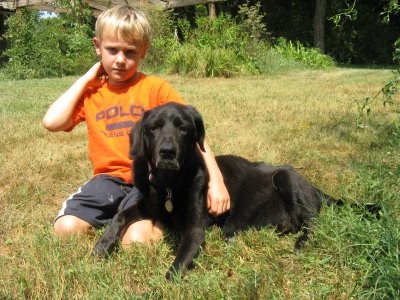 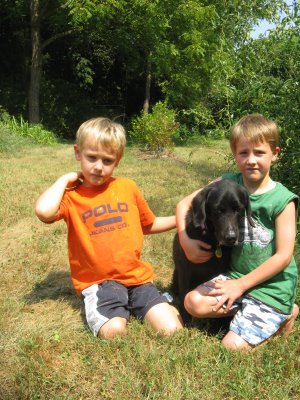 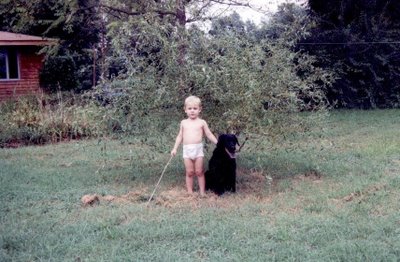 And back to the shot of Seth and Okee in front of the corkscrew willow. This was 2002, and Seth was our only child at that point, although I was pregnant with Keats. 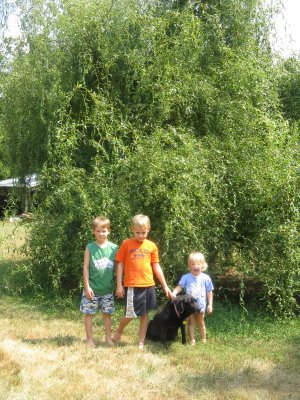 And this was last Monday about an hour before Jonny took Okee to the vet. The kids are standing in front of the same corkscrew willow, which is now so big that the kids climb it. Okee was buried just to the left of it.